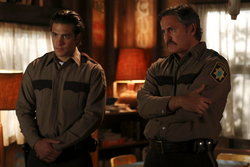 "Townie" is the 7th episode of Dead of Summer.

As the counselors and Deputy Sykes put together the pieces of what is happening at Camp Stillwater, Sykes knows that something has to be done to stop it. With the help of Deb and the counselors, he comes up with a plan that will hopefully end the attacks before someone else gets hurt... or worse. Meanwhile, flashbacks feature Deputy Garrett Sykes.

Young Garrett is biking with his friend, Damon Crowley at Stillwater in 1982 up to their principal's house. He hands his friend a bat and says 'time to lose your cherry pal' because they recieved detention for a week due to their principal not liking their t-shirts. Garrett peer pressures him into redecorating their principal's car with a baseball bat and asks 'how far are you willing to go?' After smashing the window and setting off the car alarm, the police roll up. One of the policemen happens to be Garrett's dad, Jack Sykes.

Garrett explains to his father that the detention he recieved was for no reason and that smashing his principal's window was an act of 'getting even'. Jack scolds Garrett for bringing Damon down with him because 'Damon is a good kid and doesn't have a dad to bail him out' like Garrett does. Jack questions Garrett if his actions are to hurt him, and states that Garrett's actions will only hurt himself. Garrett apologizes sarcastically that he can't be perfect like his dad but his dad says that he has never asked Garrett to be like him, but to stop trying so hard to be the opposite. Jack then slides Garrett a Camp Stillwater pamphlet and says he has no choice, other than to attend.

At camp, a young Jessie Tyler comes up to Garrett and offers him a candle apple since she has braces and cannot eat it. She introduces herself but he quickly shuts her down and says 'why do you care? we're not friends" when she asks him for his name. She remains optimistic and tells him about her previous years losing the Colors War on team red and how she believes they together can turn her luck around. Michael Goodson appears and tells them its time for tug of war.

At tug of war, a member of the opposing team makes sexual comments to Garrett about his mother. Garrett lets go of the rope and they start to beat each other up. Michael pulls them apart and Jessie goes over to confront Garrett on how he made their team lose because of his need to get even. Jessie says, "thanks a lot, Townie" and Garrett responds, "my pleasure, Braces".

Later, they play horse shoes and Garrett's dad comes to camp to check on Michael after he has hallucinations at a cave.

On parent day at camp, Garrett walks over to a lonely Jessie playing tetherball. Jessie discusses how Garrett always talks about getting even or how much he hates camp. She then says how much she looks forward to camp every year and scolds him for not trying to care.

At the last event, Jessie continues to encourage her team to win capture the flag. When Garrett is alone looking for the flag, the previous boy harrasses him again and calls him a loser. Garrett laughs as Jessie sneaks behind the boy and captures their flag for the win.

On the last day of camp, Garrett and Jessie carve in a wooden bench "Townie and Braces" and kiss right before Boyd Heelan and Garrett's Mother pulls up crying without his dad. 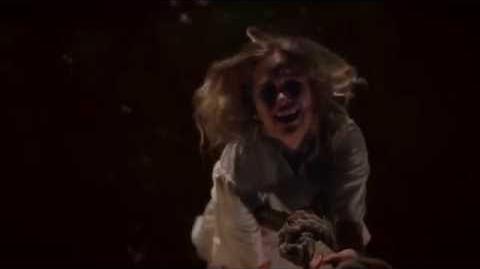 Retrieved from "https://deadofsummer.fandom.com/wiki/Townie?oldid=10026"
Community content is available under CC-BY-SA unless otherwise noted.