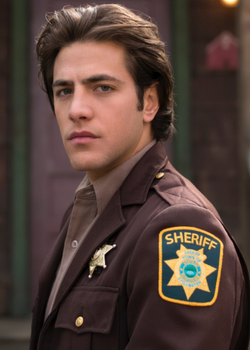 Garrett Sykes is one of the main characters on Dead of Summer.

Garrett was a troubled boy who did anything to get even. He once smashed his principal's window because he gave him and his friend, Damon Crowley, detention for a week for wearing innapropriate shirts. His father, Jack Sykes, bailed him out of everything since he was a police officer and told Garrett that his actions are only hurting himself. Garrett is later sent to Camp Stillwater by his dad where he met Jessie Tyler. They first butted heads because Garrett was still on his mission to get even with everyone, and he eventually got the nickname 'Townie'. At the end of camp in 1982, Garrett and Jessie became good friends, but then Garrett found out his father had passed away. ("Townie")

Garrett shares his findings with Jessie Tyler and uncover some clues about the mysterious map of the camp. ("The Dharma Bums")

Garrett speaks to his partner, Boyd Heelan about the fourth step of the ritual and attempts to catch Damon Crowley and his friends. He confronts Damon but is too late and appears to save Amy. He then realizes that The Teacher was his partner all along and had killed his dad. Garrett then proceeds to shoot and kill Boyd Heelan. ("Townie")

Gallery of photographic stills released to promote the character.