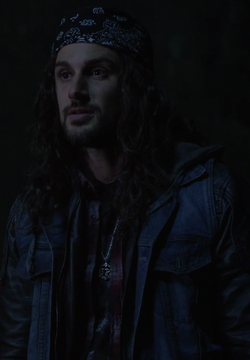 Damon Crowley is a minor character on Dead of Summer.

Damon was best friends with Garrett Sykes when they were younger and Garrett got him in trouble a lot. But according to Jack Sykes, Damon was a good kid. ("Townie")

Damon and his group are found out by Garrett Sykes. He shows Garrett how far he is willing to go by slicing his neck wide open in order to achieve immortality through vusing his blood with Amy's blood. But the ritual does not appear to work. ("Townie")

Gallery of photographic stills released to promote the character.

1 of 7
Add photo
Retrieved from "https://deadofsummer.fandom.com/wiki/Damon_Crowley?oldid=10073"
Community content is available under CC-BY-SA unless otherwise noted.